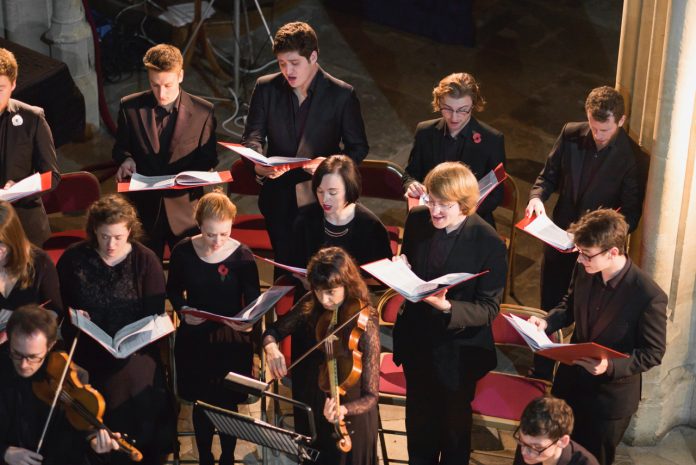 Bach, brass and the joy of Christ’s birth – plus a glass of bubbly – are the ingredients for the Oxford Bach Soloists’ traditional Christmas Eve concert at New College Chapel.

This annual festive treat is so popular that an extra performance has been scheduled for next year.

Recreating Bach’s first Christmas in Leipzig in 1723, the year he was appointed Thomaskantor (music director at St Thomas’s Church), this year’s concert features the glorious Magnificat in E flat major plus three cantatas: Praise the Lord, Jerusalem (BWV119), Christians, engrave this day (BWV63) and Behold, what a love has the Father shown to us (BWV64).

“We all know it today as the Magnificat in D, but this is the first version and includes the interpolation of four Christmas hymns.

“Bach was required to write Magnificats on special feast days, so they would have been performed by the choir in the context of a service on Christmas Day.

“The Magnificat in E flat is about half an hour, but the Christmas interpolations make it just a bit longer, about 40 minutes. And they’re great. They’re based on Lutheran Christmas hymns. There’s one based on the Gloria in excelsis Deo, about the angels coming down, and another one about the root of Jesse, which he wrote for soprano and bass. It’s actually incomplete, but it was based on another duet with the same music so we’ve been able to reconstruct the ending.”

Will the music sound familiar to audiences?

“They’ll recognize the Magnificat for sure. It’s one of the most popular choral works. The others are not so well known, but nevertheless strike a very appealing note as soon as you hear them. They’re full of trumpets and drums.

“What’s different about these, particularly cantatas 119 and 63, is that where Bach normally uses three trumpets, he actually goes for four with these two, so there’s a pretty beefy brass section. Very festive!”

The Christmas Eve concert is part of OBS’s unique and ambitious project to perform all of Bach’s complete choral works over a twelve-year period, in sequence and in their original contexts, with performers, instruments and venues that are as close as possible to those used by Bach in 18th century Leipzig.

The project stemmed from Tom’s fascination with studies exploring the effects of music on the brain, and the fact that Bach’s music has a different effect to music by other composers.

“There are various theories that suggest it’s possibly to do with the complexity of Bach’s music,” Tom says.

“I think for me it’s about Bach’s creativity. What he manages to do is combine the emotional plane with the mathematical plane in equal measure. You find yourself in this kind of existential zone, being completely lifted to another place. It’s above everything else. The father of Western music has achieved that transition by virtue of his craft.”

A former organ scholar at Hertford College, Tom started the Oxford Bach Soloists in 2017, the year that marked the 500thanniversary of the Reformation.

“The last really big Bach project was John Eliot Gardiner’s Cantata Pilgrimage in 2000, which took place in the space of a year, performing the cantatas on their liturgical feast days,” he says.

“For our project, I wanted to do something that would allow me to live side by side, year on year, next to Bach, particularly his peak period in Leipzig.

“Being a church musician myself, with an organ and choir background, I was very interested to see how practical these things are to deliver with the resources that we have in Oxford.

“We have here the sort of singers Bach might have had in Leipzig at the time, training on a daily basis, immersed in a particular style, with liturgical expectations. The only difference is that we don’t have boys on the top line. We made a conscious decision not to do that for many reasons. But nevertheless it is an educational experience.”

The OBS is made up of twelve choral scholars, who sing the solos and make up the core of the chorus, plus experienced local singers.

“Of course this is such a wonderful city for singing they’re all incredibly skilled,” Tom says. “There’s a real sense of community involvement, which would have been similar with Bach’s choir.”

The OBS’s Christmas Eve concert runs from 5pm-7pm – so you can enjoy some glorious festive choral music and still have plenty of time afterwards for some traditional Christmas Eve merriment.