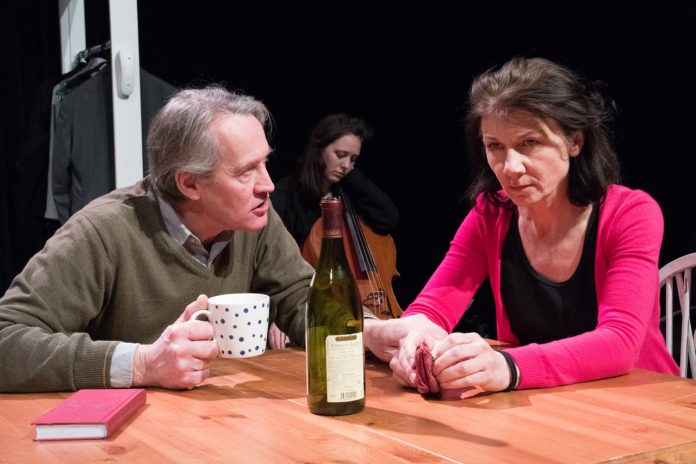 Bryonie Pritchard and Paul Ansdell play a middle aged couple: James and Ellen Wilson who find themselves at one dinner party too many.

Initially the supper talk is light and amusing and James in particular is the quintessential lugubrious host and knowledgeable sommelier. But soon the cracks in their marriage appear and the conversation becomes more barbed. Sound familiar?

“This isn’t a play that preaches but we hope it is a play that raises as many questions as chuckles.”

“Many of us blame that one particular drink for the post party hangover; we need to find and blame that tipping point, there are many such tipping points for James, but that would be giving too much of the plot away!” local playwright Gaye Poole, who wrote DRY, says.

She founded Human Story Theatre to introduce new plays with a health and social care issue at heart in an exciting way, to engage, entertain and raise awareness.

“Our aim is to be accessible to all,” explains Amy Enticknap, Joint Artistic Director

Chloe, the teenage daughter, played by cellist Rachel Watson, is caught in the midst of this wine filled hiatus, and becomes the emotional barometer of the household, as evidenced through her cello playing.

What is so novel about DRY is that it was commissioned by NHS Central South for public information reasons i.e. the detrimental health effects on middle age.

After a pilot tour of DRY in 2018, Turning Point, the addiction recovery service, even reported a spike in referrals as a direct result of the play. So they have commissioned this national tour commencing during ‘dry January’ 2020 in Oxfordshire.

DRY will tour Cornerstone Arts Centre, Didcot and The Theatre at Chipping Norton mostly on a ‘pay what you can’ basis.

So what was Gaye Poole’s motivation when creating the play? “As I started writing DRY I was obviously examining my own drinking and that of people around me.

“I had time to reflect on this habit that has insidiously taken a grip from the early reward of everything from a work success, to ‘eventually’ getting the children to bed, and lately …of just getting through the day!

“This isn’t a play that preaches but we hope it is a play that raises as many questions as chuckles.”

DRY’s music is composed by Arne Richards (Oxford Concert Party) and the tour is directed by Emma Webb.

Following every show there is a Q&A with relevant experts and personal stories on the theme of the play.

Lord Victor Adebowale, chief executive at Turning Point, said: “Every person has the possibility of change and at Turning Point we are inspired by that possibility. We can and do help people on their journeys to recovery. Turning Point supports DRY because it brings an awareness about the harm that alcohol addiction can do to individuals and society.”

Both Gaye and Amy are understandably thrilled DRY has been such a success.

DRY can be seen at Cornerstone Arts Centre, Didcot on 16 JAN, and The Theatre, Chipping Norton on 17 JAN.