When I catch up with Loyd Grossman, although I am keen to hear about his new book An Elephant in Rome, it’s his voice I am after, that infamous and unmistakable Boston drawl that so entranced a nation of TV viewers.

And, I am glad to report that his unmistakable Mid-Atlantic twang is as evident and comfortingly familiar as ever.

Now an entrepreneur, author and broadcaster, he was perhaps best known to TV audiences in prime time programmes such as MasterChef and Through the Keyhole.

But before you pack him up in a former television star box, Loyd has many more strings to his bow, which have been keeping him extremely busy since his departure from our screens at the end of the 90s.

The list includes being a passionate guitarist; first in punk band Jet Bronx and now with The New Forbidden who have appeared at Glastonbury eight times. He also plays with rock band Jethro Tull to raise money for our cathedrals. Who knew?

He is presumably doing rather well out of his tomato sauce range too considering it’s apparently the most successful UK celebrity brand to date. And he is an avid author of non-fiction books about food, art and history,

But most importantly, he is a massive culture vulture. Oh yes, having had a lifelong interest in history, the arts and heritage, he has served on the boards of a number of cultural institutions, including English Heritage and the British School at Rome and is well known for his patronage.

In June 2015, he was even appointed a CBE in recognition of his services to his heritage work.

“The arts make life worth living and are hugely important”

What is is quickly and abundantly clear during our chat is that this love and support of the arts has only deepened during lockdown and that he is worried about their future.

“So many of the cultural organisations have provided incredible online resources but it’s expensive to do so and while a brilliant way to make sure that culture is available to everyone, and not elitist, let’s hope that the people enjoying these digital events will be able to become long term supporters.”

He will be joining this list of virtual artists himself tomorrow (Thursday October 15) when he appears at the online Thame Art and Literature Festival and is delighted to be taking part.

“It’s a shame that we can’t be there in person but at least we can do something, and I am very excited to have the chance to talk about my new book. We had a technical run through a couple of days ago and it all seemed to work fine!” he says.

His new book An Elephant in Rome, published by Pallas Athene, is about the Italian capital, a city he has a deep affection for. “Rome is one of those cities that people have been to and love, or want to visit.

“There really is a natural excitement about Rome because it is a beautiful and well thought out city. My book explores a side of Rome that not many people know about.”

It certainly does, concentrating on Pope Alexander VII’s determination to make Rome Europe’s must-visit destination in 1655. He enlisted the talents of the most important artist of his age Gian Lorenzo Bernini.

Together, they made one of the greatest artistic double acts in history, inventing the concept of the bucket list destination and in the process creating Baroque Rome as a city that continues to delight and attract.

The title is a nod to his own romance with Rome, first kindled when Loyd set eyes on the enigmatic monument of said elephant carrying an obelisk outside Santa Maria sopra Minerva. In so doing, his book teases out the intertwined strands of history, power and art that make up the Baroque.

A subject close of his heart then? “The arts make life worth living and are hugely important, aside from the economic value they bring,” he tells me from his home in South Kensington.

“So I am really looking forward to Thursday and talking about the subject with a new audience. I have never taken part in the Thame Art and Literature Festival before, but it has become a major fixture on the festival scene so it’s great to be part of it.”

And with that he’s off, back to his many pursuits, no doubt to deliberate, cogitate and digest further.

You can see Loyd Grossman talking about his book An Elephant in Rome on Thursday October 15 at 5pm which is available from all good bookshops.

Find out more at www.talfestival.org 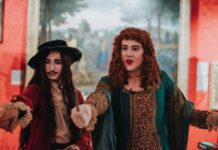