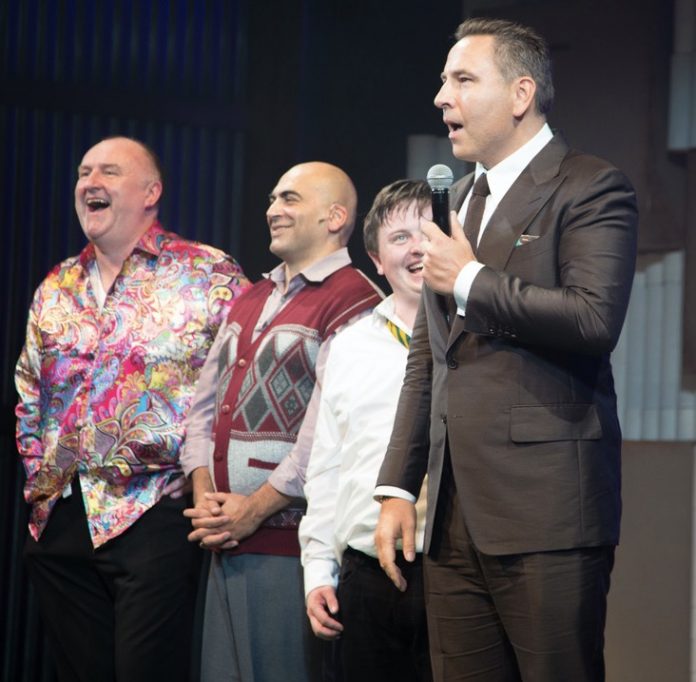 “If I had a billion pounds to spend today I’d get a water slide from my bedroom to my swimming pool, because water slides are so much fun. I love them,” David Walliams says when discussing the premise of his famous children’s book Billionaire Boy, recently made into a stage show and coming to Oxford’s New Theatre from today.

Said water slide is already owned by his character Joe Spud, aka the billionaire boy, obviously a fantasy of Walliams himself.

“Joe just gets out of bed and goes straight down a water slide. That is something I don’t have and it really pains me,” Walliams explains.

“But that’s the most brilliant thing about seeing a book that you’ve written come to life either on television or on stage. You feel like a magician because what was in your head is somehow now all real, right in front of you, so it is a very very exciting thing.”

So how does the Britain’s Got Talent and Little Britain star approach writing then? “When I write the books I’m not thinking much beyond them being books. And, of course, in children’s books you want to have lots of really exciting things happening, like helicopters and fast cars.

“I know that does create problems for people staging it but then the brilliant thing about theatre is that with imagination, anything can be done.”

Cue The Birmingham Stage Company which has already staged two incredible adaptations of Walliams’ books – Gangsta Granny and Awful Auntie, both of which toured the country, ran in the West End London and received rave reviews, because they are also bringing Billionaire Boy to life on stage.

“I’m really excited that a third book of mine is in their hands. I think this could the most fun show of all because in a way this is the most comic book,” Walliams adds. “It’s a story with an emphasis on jokes and silly situations, and obviously the whole thing is quite surreal with someone having so much money.

“So I think it’s going to be a really fun theatre show and I can’t wait to see it.”

For those who haven’t read it or seen it on TV, Billionaire Boy depicts Joe, who is only rich because his father, Len Spud, who was just a humble man who worked in a factory, came up with this brilliant idea of a creating a special toilet roll which is moist on one side and dry on the other.

So where did Walliams come up with such a hare-brained plot? “I met someone who was really rich and it was because their father provides toilet roles to lots of pubs in the north of England and I thought, I could do that, but I didn’t have the idea, did I? ” he explains.

“But I think Bum Fresh is a fantastic invention and I cannot believe someone hasn’t come to me and given me a billion pounds for the idea. because if it was produced I think it would really catch on,” he adds.

“But I liked it being something like this which the Spuds made their money from because actually when you sometimes meet people who have lots and lots of money you find it’s really bizarre, the things that they do.

So apart from Joe Spud, who is Walliams’ favourite character in Billionaire Boy?

“Mrs Trafe, the dinner lady and I actually played her in the TV adaption. Basically in the story she asks Joe for money and she says she needs it for a hip operation, but instead spends it on plastic surgery.

“So it was a lot of fun creating her horrible school dinners and also a lot of fun giving her the surgery in the book and seeing what she does with the money.

“It highlights the fact that Joe’s in a pretty difficult predicament because everyone is asking him for money and they all have good reasons why they need it.

“But at the same time money is quite a corrupting thing and it makes people do bad things and lie to him. So Mrs Trafe is really a side character but she does something pretty important in the story.”