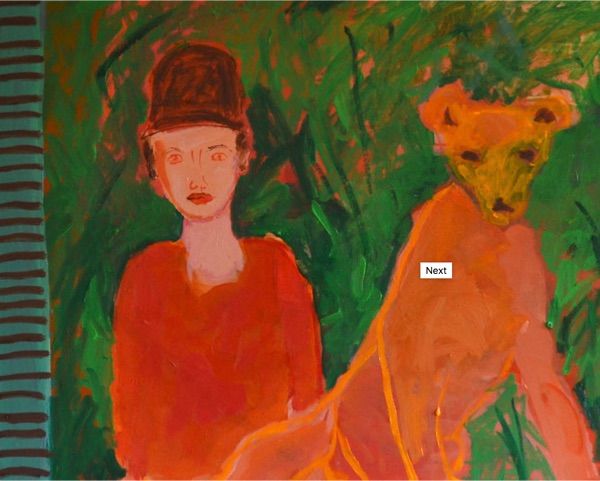 It seems an unlikely premise, opening a new gallery in Woodstock to host emerging artists, talks and events, when you are already a well known painter in your own right.

But that is exactly what Julie Wigg has done at Darl-e and the Bear, and her eye is second to none. Lining the walls are a wonderful fine art collection of paintings, ceramics, figures, sculptures and textiles in her new, reimagined gallery space.

Julie wants to rethink how galleries are perceived and used: “I want to encourage people in who would not ordinarily come to a gallery,” she says shrugging.

“I personally have always struggled with stark, white walls, even when doing my degrees, and wanted to create a welcoming warmth for people who wouldn’t normally walk through the door. That is why there is no art or gallery in the title.”

Julie repaints the walls continually to encapsulate the art hanging from them and is trying to reimagine the space to make it more user-friendly, ethical and environmentally friendly.

“A lot of the artists work ethically anyway, especially the youngsters – they are more concerned about repainting a canvas than starting again on a new one,” she says.

This is evident in the gallery already; Rachel Scott’s beautiful woven rugs are 100% natural. Laura Ellen Bacon won a V&A craft prize for her woven willow sculptures currently in the window, and Ben Payne paints on recycled wood.

Darle And The Bear also supports environmental and conservation charities through its sales, in particular Polar Bear International and the World Wildlife Fund.

“We give a monthly donation to these charities, especially money raised from the events and talks. So 20% of all sales in the new exhibition will go to the WWF Australian fund,” Julie says.

Julie’s first degree was in graphic design at Norwich School of Art and then more recently fine art at De Montford University. She is currently doing a History Of Art masters.

The thought of opening the gallery came about two years ago. “I just did it. I had not intended to open a gallery. I bought the space (The one long gallery has two entrances on two separate streets in Woodstock) to do up, renovate and lease as a shop. But then I fell in love with it, so decided to use one end as a studio and for the odd exhibition and talk,” she says. “It was going to be a personal project.

The other end was leased to an artist who left unexpectedly, and Julie had a short window to decide whether to lease it our open her own gallery. “I decided to go for it,” she smiles.

Since then Julie has had to learn not only how to run a gallery but also how to fill it. Some of the artists she was interested in were initially nervous about giving work to an unknown, but she soon won them over through word of mouth and recommendations.

“I wanted to change that relationship between the gallery and the artist so here they can exhibit any work they want and take it back when required. I wanted to loosen the rules, and having exhibited myself I know how helpful that can be,” Julie says. “I didn’t want to be restrictive but wanted to enable the artists to work more fluidly.”

Is it working? “I may have a very naive approach and it has been quite an organic approach but it suits the artists. I just hope it will just keep growing from here.”

And how is the reaction to her gallery so far? “We are having a really good response. Customers find it restful and relaxing when they come in because it’s quite homely, less austere, softer. And they like the variety of work, which is good because they then come back.”

Main gallery aside, the second space which links through via a walled garden which will be open in the summer, is being used for specific exhibitions, events and talks. So far these have included Richard Cork (on Bomberg and the Old Masters) the exhibition he curated at the National Gallery. Art historian Nick Nelson talked about the Power of the Portrait (tonight), and many other evenings are being planned.

Next up though is Julie’s next exhibition, opening on Thursday, Materialisation Of The New, which is all about emerging artists. It features the likes of Gavin Keightley, Karen Loader, Saroj Patel, Jake Fisk, Abigail Mcginley, Kieren Macdonald, Philippa Paterson, Amy McMillan, Gabriel Chaim and Belle Marler.

There is a film as well by Bishwa Rai.

Not all the work is for sale, but Julie says: “I think it’s important to support new artists coming through. The gallery actually purchases a piece by each of the young artists to give them a hand. People want to know who to look out for in the future.”

And what of this current swing back to contemporary art and emerging artists? “It’s the idea of things being hand-made, not mass produced, that’s so attractive again – going back to a more ethical way of living.

“People are less frightened about the decision making. You can just like a painting without the hypocrisy of thinking you have to know about art to like it.

“Plus people are less worried about mixing and matching. It’s really about freedom of choice. You do not have to understand art to like it.”

As for Julie, what of her work? “Oh yes I’m in here she says leading me to the back where her glorious paintings are hung, almost apologetically. “I just see painting as something I do,” she says shifting uncomfortably.

When pushed she adds: “I paint loose landscape, a move towards abstraction in very fine old glazes. I’ve always painted, but professionally for 10 years.

And why seascapes? “I was brought up on the coast. I come from Suffolk and my family have all been trawler fishermen, sailors, boat trip skippers and research boat captains. I love the sea.

“But it’s also about the essence of being in the space. When you are sitting in the landscape, not just sitting in isolation, but the space around you, the wind, movement, sound, light. A lot of people say my paintings are slightly Turnerish because I rotate the canvas when I paint so you get this movement, but they are all consuming. It’s something I’m very passionate about.”

Materialisation Of The New is at Darl-e and the Bear from Thursday until Feb 9.