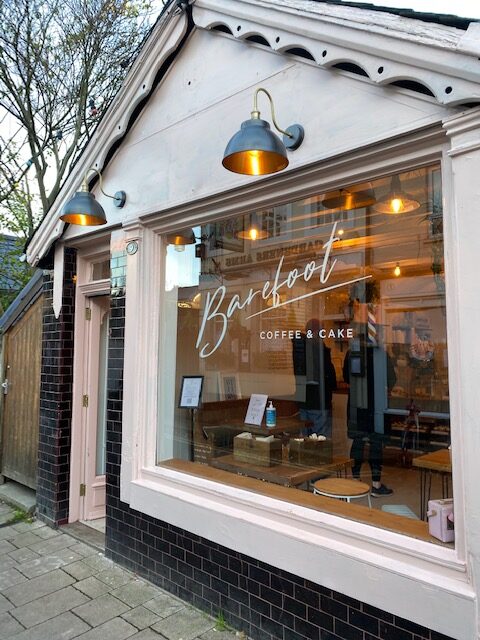 Fraser Jones is in great spirits when we speak, having just opened Barefoot Oxford’s second shop, this time in Oxford’s North Parade, a spot he’s always hankered after.

Those of you who have visited their existing Barefoot cafe/shop in Jericho will know what to expect. Irresistible cakes, cookies, donuts, biscuits and more festoon the window, people often queueing to get their hands on them, while inside the busy cafe is equally as popular.

“We wanted it to be a home away from home, somewhere comfortable and relaxing,” Fraser says.

The Barefoot business has fared well during lockdown, their brownie delivery boxes being sent out all over the country, the Jones’ struggling to keep up with orders.

But in the meantime, the pair were busy getting their new second site ready for lift off.

So why North Parade? “It’s where we started out, at the outdoor market there, and our first wholesaler was No 2 North Parade, so it really fits with our clientele and our ethos,” Fraser says.

And although lockdown meant that Emily and Fraser closed their shop in Woodstock permanently, the new premises in North Parade seems a much better fit.

The Barefoot outlet at Up in Arms in Marston, like a hole-in-the-wall, has also fared very well over the past few months.

As for their wholesalers, they are wide and varied; from The Crown in Woodstock, Branca in Jericho, The Vaults in Oxford, Society Cafe, The Bicester Village Farm Shop and The Chester to UE Coffee Roasters in Witney, Flo’s In The Park, Mostro Coffee, New Ground Coffee and Charlbury Deli, their fans spread far and wide.

The Barefoot business started out from their Oxford home six years ago when Fraser’s wife Emily began baking. She began selling her cakes at markets and when offered The Jericho premises the pair jumped at the chance. Since then business has boomed.

“We never intended to have a bakery business. Our bank manager calls it an ‘accidental success’, Fraser laughs, “but we now have an industrial kitchen in Cowley and employ five full-time staff in the kitchen and all the shop staff as well, so it’s pretty full on.”

So what’s the secret? “I don’t know. There’s something about Barefoot that people love. If you’re going to stop for a cake and coffee we want ours to be the best you can get. But from the beginning we have kept things simple – good cake, good frosting, no additives, preservatives or colouring,” he says.

The cakes on offer change daily and seasonally and the pair constantly strive to bring new additions to their offering such as the popular cinnamon buns and new donut ranges.

Today for example you can try gluten free fig and orange cake, a flourless chocolate and pear, peanut and salted caramel donuts, chocolate fudge bundt cakes and, cake wise, a rhubarb, apple and custard or apple blackberry and thyme variety. I know!

“Over thanksgiving we did a roaring trade in pecan or pumpkin pies and we have just started a range of birthday and celebration cakes which you can come in and pick up without ordering.

The Barefoot ethos is also a major selling point, using only natural ingredients with everything made fresh, as Fraser says: “If we don’t make it we don’t sell it.”

Fraser and Emily have always worked in the food and events industry, Fraser formerly for Jamie Oliver’s Feasts. He then moved to Taylors before setting up Barefoot.

“We just decided to take the plunge and make it work. It was a big ask because we had to make sure we could cover all our own bills as well, but it’s worked out well luckily.”

So what next? World domination?” Fraser laughs. “We are happy with our shops for the time being. But as we have a kitchen empty at night we’d like to branch out into breads and pastries, extend our range a bit to include more things.”

So lockdown has turned out all right then? “Yes, to start we had a massive panic, shut the shops and went on lots of dog walks, but because of the brownies and our wholesalers it’s actually been OK and we have managed to survive, as well as open the shop in North Parade.”

And then he pauses: “We are very lucky to be in this position, and the support we have received has been humbling.”

As for Christmas, there are rumours of a new Barefoot cake kit being produced but Fraser is remaining tight-lipped about it’s launch date in case there is a stampede. I’m already first in the queue.