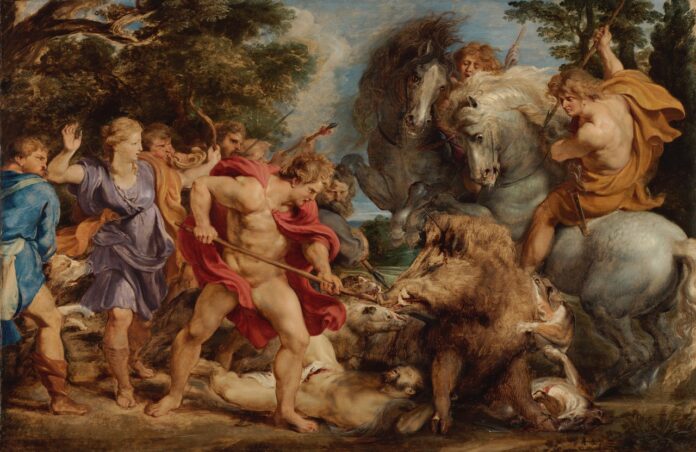 After a year of setbacks, postponements and cancellations, Bampton Classical Opera is finally bouncing back with not one but two operas by Gluck.

Paris and Helen – originally planned for the company’s main summer season last year – has now been rescheduled for this July, with the 28-year-old company returning to its Deanery garden home.

Before that though, is a concert performance of Gluck’s one-act opera The Crown, which is coming up on 22nd May and marks Bampton Opera’s debut at the University Church, Oxford.

Unusually for Bampton, the opera will be sung in Italian, with actress Rosa French providing linking narrative in English.

“We wanted to shorten it by not having recitatives, which are quite lengthy,” explains Jeremy Gray, who co-founded the company with wife Gilly French in 1993.

the opera languished in obscurity for more than 200 years

“Also, we were still translating Paris and Helen at the time and didn’t feel we could take on a second translation, so we decided to do it a slightly different way to  how we normally perform. I think the arias are beautiful, so we’ve got beautiful music and the beautiful Italian language. Our staged works will still be in English though.”

The Crown was commissioned by Empress Maria Theresa in 1765 to honour the name-day of her husband, Emperor Francis I, in October, with four of the couple’s daughters singing the four soprano roles.

Sadly, the emperor’s death in the August resulted in the performance being abandoned, and the opera languished in obscurity for more than 200 years. It was finally aired by the Austrian Broadcasting Corporation in 1966 and received its first staged performance in 1987 to mark the bicentenary of Gluck’s death.

Why, I wonder, did it take so long to stage the work after its original intended performance?

“It’s an awkward length, about an hour and quarter, so it’s not a full evening,” Jeremy says. “It’s also a slightly tricky piece to pull off onstage, although I wonder if one day we will come back to it and stage it, because I think it’s quite an intriguing and rather lovely story.

“Because it wasn’t performed in Gluck’s time it wasn’t published. It’s been part of the modern revival of works of the early music movement, so actually there are two recordings of it, a Polish recording and an American recording, which are both quite decent and quite different from each other.”

For Jeremy, putting on two Gluck operas in one year has made for an interesting comparison. “They are very different,” he says. “Because The Crown was written for a court performance, it is quite a conventional opera. It’s based on a mythological libretto by Pietro Metastasio, and it’s not Gluck as a reforming composer – it’s Gluck as a very successful composer of florid Italian opera, so the arias are very straightforward.

“They’re beautiful arias, highly decorated, and it’s very exciting music, but not the sort of music that changed history in the way that Orfeo ed Euridice had done a couple of years previously. So he was reverting to a more conventional model with this.

“But then five years later, when he wrote Paris and Helen, it was actually the first of his so-called ‘reform’ operas. So the two operas are very different in style. They could almost be by different composers.”

Set in Ancient Greece, The Crown tells the story of a ferocious wild boar unleashed on the coastal town of Calydonia by the goddess Diana as a punishment for the lack of sacrifices made to her by the king. The boar causes widespread death and destruction before it is finally hunted down and killed by a brave trio of women led by Meleagro, the Prince of Calydonia.

The opera ends with the four agreeing to present the crown of victory to their patron, Emperor Francis.

“We feel there’s a sort of allegory here,” Jeremy says. “The story is about determination, about bravery, about taking risk and ultimately winning through, and we hope people will appreciate that sort of spirit.

“I think it’s going to be great. We’ve got some wonderful singers, as well as the orchestra Chroma, who are coming down from London.”

One of the singers, Lucy Anderson, who plays the role of Asteria, was the 2019 winner of Bampton Opera’s Young Singers’ Competition.

Jeremy is also excited to be taking the company into a new venue. “We’re really looking forward to performing in the University Church,” he says.

“That came about because our conductor, Robert Howarth, is organist/choir master at the church. He’s had an illustrious career as a conductor, so when we asked him to conduct The Crown it led to the idea of doing it at the University Church.

“It’s a great building. It’s a good space, it’s got a good acoustic and it’s in a very prominent place in Oxford, so it’s a great place to do this.”

The Crown, of course, is La Corona in Italian, but despite performing the work in the original language it was felt the title might be off-putting in the current circumstances.

“We decided we wouldn’t call it La Corona because so many people have had an awful experience,” explains Jeremy.

“We want this performance to be a very positive thing, a positive opportunity for musicians to perform again because they’re desperate to get out there and get on with the careers, and a positive experience for audiences who are wanting to come back.

“We can’t wait. We’ve got a very busy time coming up!”

The opera is also being performed at St John’s Smith Square, London, on 18th May, and this is being filmed and will be available for viewing on the Bampton Classical Opera website from 23rd May.