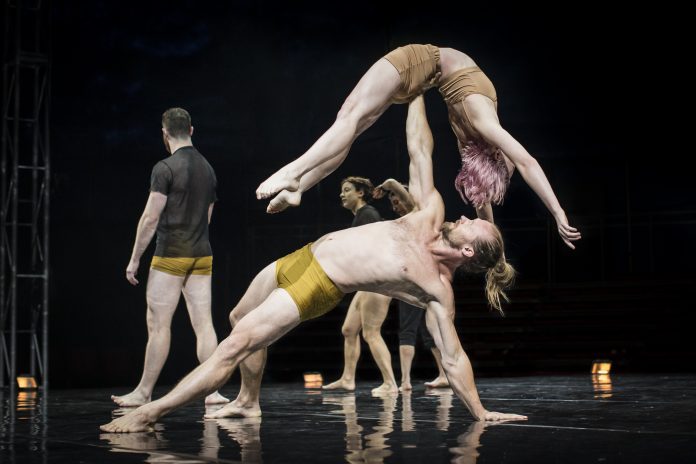 When Lachlan Sukroo was a boy, his parents would sometimes take him to see Circa, an internationally-renowned Australian contemporary circus ensemble, as a treat.

He stared in awe at their athleticism as the acrobats tumbled across stage in front of him, pushing the boundaries, and their bodies, to the limit in ways he’d never dreamt possible.

And now here he is, aged 24, having left Australia, to join Circa, the very act he once revered. Currently on tour and preparing to perform in Humans at the Oxford Playhouse he is indeed “living the dream”.

Whether Circa was solely responsible for his diversion into the circus, or whether Lachlan would have made it anyway, who knows, but the 24 year-old is as excited as anyone, having only joined the acclaimed troupe in February.

Using 10 acrobats, Circa demonstrates a combination of aerial trapeze, acrobatics, contortionism, impossible shapes and more to challenge us to ‘explore how our bodies, our connections and our aspirations all form part of who we are’.

But Circa are so well known as a circus act that we can expect them to really push the boundaries.

Which would explain Lachlan’s devotion to the circus, taking circus skills classes after school, and then going to The National Institute Of Circus Arts in Australia after high school for three years.

“Australia is well known for its circus traditions, especially its ensemble and acrobatic pieces and styles.

“And I was always a bit of a show off,” he laughs, “so the circus suited me. My parents were always really supportive, and now that I have a full-time job with Circa I’ve proved them right.”

So how is the touring? “Circa is its own little community. Of course we are competitive but we push each other on.”

But don’t for a second underestimate how hard these acrobats work. “We train for eight hours a day, so yes it is physically exhausting,” he says.

“But Circa has its own unique style. They are highly skilled acrobats, pushing the boundaries in a way that no one else does, so it’s really interesting.”

Was it intimidating when Lachlan joined? “A bit,” he admits “but as soon as you get out there on stage you forget your nerves and concentrate on the job in hand. You soon find your spot.”

As for the show, he adds: “Yes we take you on a journey about what it takes to be human in a physical sense through the acrobatics. It’s very pared back, without a set, just set against a black background, so we appear quite vulnerable. It works really well.”

Having finished a month at Edinburgh Fringe, a stint at Glastonbury and a tour schedule to South America, Spain, France and LA Circa is certainly getting around.

“But this is my first time in Oxford, so we can’t wait,” he adds.

As he said – living the dream.

Circa – Humans is at Oxford Playhouse on Friday 13 & Saturday 14 September.