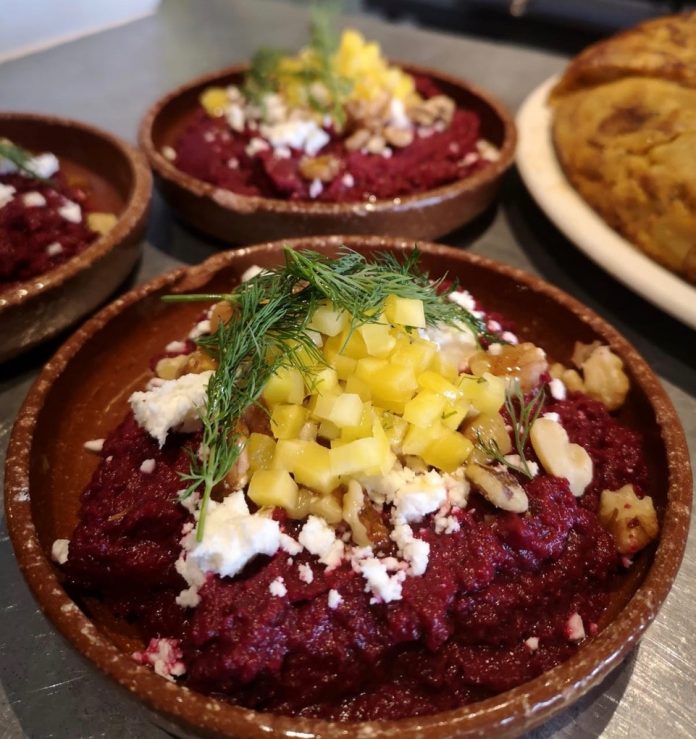 Not only is the highly successful tapas restaurant Arbequina on Cowley Road launching a new takeaway menu in June, but it is also unveiling a brand new look by merging with next door bar Terruño Bar.

“We have wanted to take down the wall between the bar and restaurant for some time now, but couldn’t decide when was the best time to close for a couple of months. Covid 19 has decided that for us,” general manager Ben Bateman says.

“Knocking through into next door bar will create a more fluid space to accommodate both eaters and drinkers,” he adds.

And yet Terruño Bar only opened recently to house the overflow of hungry customers waiting for a table next door? So why change a winning formula?

“It was always the plan to knock through, but the logistics have been quite complex as the two buildings have two different landlords. We have all come to an agreement now, and the work is nearly finished,” Ben says.

“But more than that, we are so busy, especially on Friday and Saturday nights, and wanted to take advantage of the space we have available and watch people flowing between the two, eating and drinking together.

“It also means that if we reopen, but still need to socially distance, there will be more room to do so,” Ben points out.

Since then it’s been a roaring success, drawing crowds from far and wide, flocking to try the unpretentious authentic Spanish tapas being served by Ben and his band of Spanish chefs.

“So although it’s been really sad having to close, the pandemic has given us the opportunity to give Arbequina a much needed facelift so that when everyone returns they will find something really beautiful waiting here for them, something new.

“Every cloud has a silver lining it would seem.”

Decor-wise the interiors will now match, Terruño Bar being all dark and moody, Arbequina light and airy until now.

The historic signs will however stay in place, Terruño Bar has a new one, displaying its former use as a watchmakers Ravenscroft & Fraser, while Arbequina next door has a chemist sign.

“The original signs are so historic we wanted to keep them,” Ben says, “So we’ve had a specialist sign-maker in to restore them properly.”

As for the takeaway, Ben says the Arbequina team can’t wait to get back in the kitchen to recommence what they do best, cooking and feeding people.

“It’s massively exciting and we are all itching to get going and see some familiar faces again,” Ben says.

“Because of the furlough scheme we’ve been able to keep our staff, so are ready to reopen rather than having to start all over again. It’s been a massiv shame to have to close because we love what we do but everyone is in the same boat.

As for the new takeaway menu expect some Arbequina classics as well as some new dishes – onion tortilla, beetroot borani with feta, walnuts, patatas bravas and nduja on toast with thyme and honey.

The short menu will constantly change and is running three nights a week, starting on Thurs June 4.

“We want to offer something really special and different during lockdown and hope everyone will go tapas crazy,” Ben adds.

The Arbequina takeaway will run from Thurs-Sat, 5pm-8.30pm from June 4 with orders from 4.30-8.30pm go to https://arbequina.co.uk Collection only.