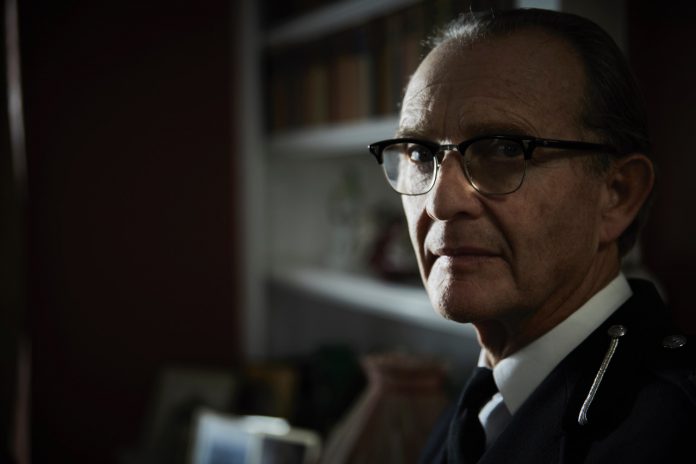 Anton Lesser is much more relaxed in real life than that of his famous character Chief Superintendent Bright, joking around, bemoaning the cutting room floor, chatting and telling us anecdotes from the behind the scenes.

If his character has been sidelined until now, this is all about to change in series seven of Endeavour, as CS Bright, the man outside of the uniform, is given the limelight.

“He’s starting to question everything about himself, the big questions; has he failed as a human being, husband, father…… there was a child that was lost.

“I just asked myself how this man operates when he isn’t in uniform. He’s looking for what’s true and who he will be if he loses his wife.”

“So we are getting the beyond the surface, not just showing the man who has always lived by the book.”

But is this more than a mid-life crisis? “There’s stuff that challenges them all in their personal lives in this series. Stuff going on collectively and individually. And for me, on a personal level, with Bright’s wife (who is ill).”

SHAUN EVANS ON FALLING OUT WITH THURSDAY: https://www.oxinabox.co.uk/shaun-evans-talks-to-us-about-the-new-series-of-endeavour-directing-the-first-episode-falling-out-with-thursday-and-morses-terrible-taste-in-women/

With our giving too much away, Bright struggles to cope with her cruel decline. So was that hard?

“As people do in those situations you play out all the awful scenarios in your head don’t you and assume the worst, and fantasise about the best. Panic, decline, encouragement and back, again and again. He’s going through all that and the complexity of trying to express all that in the context of a few lines is a nice challenge. Its lovely.”

“I’ve been longing for the other aspects of Bright to get beyond the surface, the ones that we’ve never seen. All that is being challenged which I love.”

But we thought Bright was back on familiar territory this time around. After all, his team is finally back together isn’t it?

ENDEAVOUR’S ABIGAIL THAW ON ACTING WITH HER DAUGHTER WHO PLAYS HER MOTHER: https://www.oxinabox.co.uk/its-a-family-affair-john-thaws-daughter-abigail-stars-in-endeavours-new-series-with-her-own-daughter-playing-her-mother/

“Well it is and it isn’t. He’s restored, he’s got a nice big room again rather than the traffic shoebox. He’s restored in that respect. His authority is restored but as the structure, and authority, and change of command is restored, and we are happy that our team is back together, at the same time there is an emotional fragmentation that starts to increase as we get into this series, so it gets more interesting.

“As an actor you want something more, so I do enjoy him as a character in direct proportion to the complexity of his life.”

Why now? The answer is in the format of these three film-length episodes in which the back story of the characters themselves runs concurrently alongside in the background.

Or as Lesser puts it: “These little fissures start to fan out and we get the sense that all we thought was healed and renewed at the beginning is not necessarily so. It’s about how their lives shift and mutate.”

So where did Anton start with this new development? “Intuitively, not over consciously. I just asked myself how this man operates when he isn’t in uniform. He’s looking for what’s true and who he will be if he loses his wife.”

Having worked extensively at the RSC, and with a CV the length of my arm (he was in the six part Christine Keeler TV drama over Christmas for example), you can understand why Lesser is enjoying this new challenge.

And what of the new tension between Thursday and Endeavour? How does Bright cope with that? “Thursday appears to take his eye off the ball but then it gets more complex,” Lesser expands.

“Bright then starts to challenge Thursday’s fitness for the job and asks Morse to go over ground that Thursday has already investigated. which is challenging to his authority,” he tells me.

But aren’t Thursday and Bright firm friends? “Thursday is the nearest thing he’s got to a friend I’d say. They bail each other out and compromise their authority and position for each other, without publicly breaking that stiff reserve they’ve both become habituated too.

“But this is more interlinked. There are resonances, and things that have an impact on them both. It gets very complex but really exciting,” he promises.

Not in real though I hope?

“We have such nice banter when sitting around waiting to begin filming because we the main actors are all back together which is great. It’s lovely to see on a call sheet when we are all in together.”

Even when Shaun is directing? “Oh yes – he’s great, absolutely spot on. Knows exactly what he’s doing, or at least is such a good actor he pretends to,” Anton jokes. “It’s really lovely to work with him. Shaun makes it very easy, simple and economic because he knows the crew already and is such a lovely guy.”

And with the next series already commissioned for next year, according to Lesser, it seems we’ll be seeing a lot more of him.