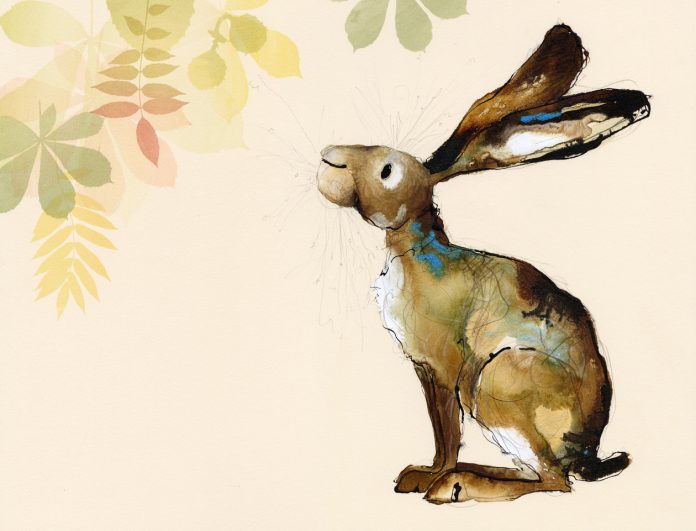 “It came about quite quickly because as soon as I realised it was seasonal I was immediately inspired,” Catherine Rayner says about the 28 pieces in her upcoming exhibition at Sarah Wiseman Gallery.

“I’d previously completed a spring exhibition in London, so this was more about wild animals going to sleep, and leaves dropping from trees as the season changes – the shapes and colours are so different. So when Sarah asked me for the title, Rustlings seemed the obvious answer.”

“animals all have a story to tell”

The Sarah Wiseman Gallery was the first to exhibit her artwork in 2009, having seen one of Catherine’s animal pictures in an art fair in Edinburgh.

This will be her third solo exhibition with the gallery, a prospect she is hugely looking forward to. “ I love working with Sarah, she’s been such a great support over the years.”

So was it hard to fit the exhibition into her busy work schedule?

“ I did have a little panic” the children’s book illustrator, writer and artist laughs, “because I was writing and illustrating a children’s book at the same time, but I was really organised about it and set up two desks next to each other. When the ink was drying on one I moved to the other. It was a nice way to work and a real buzz.”

Catherine Rayner’s first book was picked up and vied over by two publishing companies while she was still at university, to give you an idea of the 37 year-old’s longevity and prolificacy.

Since then she’s been in great demand so is used to having multiple deadlines.

So has her work changed much over the years? “Of course to some extent, but it’s still recognisable in its observation of the characters and animals,” she says.

Catherine has always been intrigued by animals and their personalities, as evident in her art and books, since she was a child.

“ I have always been obsessed with animals characters, their personalities and what they are like, to draw the viewer into those questions rather than just looking at a picture,” she explains.

“ I have been since I was a child, and at university I found still life drawing really frustrating so was allowed to go to the zoo and sketch the tigers instead.

So where did this obsession with animals come from? “My family were animal lovers and we always had all sorts of pets. They were such characters, especially our sausage dog which I used to draw over and over again to show how fun he was, because animals all have a story to tell.”

And her illustrations? “Well they do too but I make them up, something for the reader to become attached to, something you can create in your mind.”

Catherine now lives in Edinburgh with her husband, whom she met at art school (a furniture maker and designer), two small children and a cat, guinea pig, a fish and a horse, has many plates spinning at any one time.

And yet being an artist and an illustrator are two things that go hand in hand, and Catherine enjoys both. “I honestly don’t think I could do one without the other,” she says. “ Swapping between the two is relaxing and refreshing at the same time, so they feed off each other.

That’s not to say she is complacent either, adding that she is still never saitisfied with the finished product.

So are people snobby about her work? “ You mean do they consider me a proper artist? A lot of people used to be patronising and say I’m not, that I was JUST an illustrator,” she sighs. “I used to argue with them and ask them to define art, but now I just don’t care so I just say OK and move on.

“It’s such nonsense because a child’s first experience of art is a picture book and people buy my work to put up on their walls because it appeals to multiple ages, which is such an honour. But I’ve grown to care less what other people think,” she smiles.

The proof is certainly in the pudding, Catherine’s books selling better than ever in this current age of technology. “Yes books have had a resurgence, she says. “Parents are making a thing of reading and going out to buy a book like never before, and as a result books have got more beautiful and colourful because publishers are able to spend more on their production.”

As for the subject matter, Catherine laughs and says she tends to do what she likes these days. Her publishers trust her and their success speaks for itself.

“That is a pressure in itself, “ she concedes. “ but I still love it and I am still so delighted when people like my work. It always surprises me.”