Home Get In Touch Interviews “All for one and one for all.” It’s open air theatre but...
Facebook
Twitter
WhatsApp 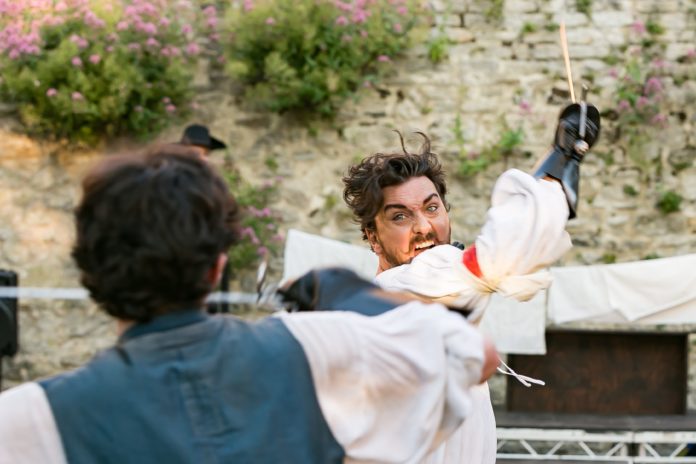 The Three Musketeers are swashbuckling their way through Oxford this week with a dazzling array of sword-fighting, romance, humour and intrigue.

The script, adapted from the famous novel by Alexander Dumas by Oxford’s own ElevenOne theatre company, will be played out in the beautiful gardens of the History Faculty off George Street, for anyone seeking an alternative to Shakespeare.

“Absolutely,” director and theatre founder Mike Taylor told me. “That was always the plan. To give Oxford’s audiences something other than Shakespeare to see in the open air, something dynamic with a really good story-line.

“And of the 16 shows we have done since ElevenOne began, that has always been our intention.

“We are really trying to push the boundaries, because the Shakespeare market in Oxford is so saturated.

“And the History Faculty is such a wonderfully historic venue so where better to bring such a cracking show?”

The main challenge has been reducing such an epic tome of a book into a fun, tangible, cohesive script.

In ElevenOne’s version d’Artagnan is a young man trying to become a Musketeer.

“The Musketeers are rather resting on their laurels when d’Artagnan arrives on the scene, so this is about revving their reputation.

“But it’s also about a rather gauche d’Artagnan becoming mature enough to become a Musketeer.”

If it all sounds a but macho fear not. Mike assures me there are numerous strong female roles in the cast, most obviously the lovely Constance and the resulting romance has “some nice emotional arcs.”

So how has it gone down? “The audiences so far have been so appreciative, because it’s a really exciting production. We employed a performing fight choreographer to make sure the duelling scenes are as inventive and realistic as possible, so it’s quite physical for the cast,” Mike says.

His son Daniel is playing  d’Artagnan, before taking up a place at drama college.

As for what’s next, ElevenOne is planning to present an adaption of His Dark Materials by Oxford’s very own Philip Pullman, so watch this space.

In the meantime, it’s all for one and one for all.

The Three Musketeers is at The History Faculty, George Street, Oxford until Saturday July 27, with a matinee on Saturday. Tickets at oxfordplayhouse.com or 01865 305305.