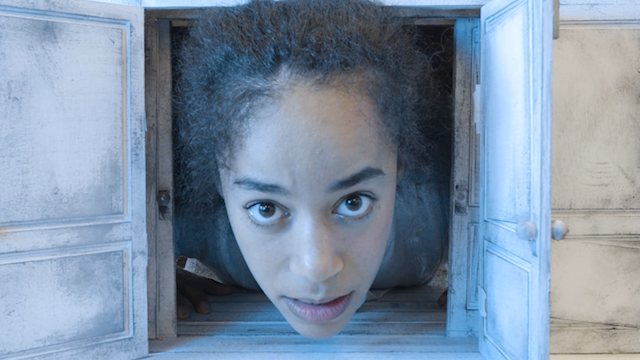 “It’s mad, it’s like nothing else, and very surreal, but it’s brilliant. Mad but brilliant,” Creation’s CEO and artistic director Lucy Askew tells me proudly.

Yes, Creation has launched its summer show and is really pushing the boat out with its virtual adaption of Alice: A Virtual Theme Park, ready to entertain a family audience desperate for some live theatre.

“We have really upped the visuals and technology, which means the audience gets choices and can pick which path they take”

And thanks to Creation’s previous two virtual lockdown productions of The Tempest and The Time Machine, spreading virally to huge acclaim internationally, from America to Africa and Brazil, there is already a huge worldwide audience queueing up to log on for Creation’s next production, based on the Lewis Carroll original Alice In Wonderland.

Hailed #bestvirtualtheatre experience by New York Time Out for example, the pressure is on. So what can we expect from the virtual extravaganza and how is Creation coping with this global spotlight?

“It’s been a big challenge, because people have really high expectations, so we have taken it up a notch again and made Alice even more interactive.

“So there are live hedgehog races between the audience members and the Red Queen and the rabbit for example. It’s so much fun.

“One family spread out throughout Africa have all booked in to watch together, while another was watching from their holiday home at Centerparks”

“So we’ve really gone to town on the different locations, and along with our work with Charisma A.I. and Big Telly, really upped the visuals and technology, which means the audience gets choices and can pick which path they take. So it’s great for a Zoom audience.”

Not only that, but Creation has recruited some top playwrights such as Charlotte Keatley, famous for her classic play My Mother Said I Never Should, to help craft the script.

As for the usual Creation madness, one entire theatre scene takes place in the Mad Hatter’s hat, while Tweedle Dee and Tweedle Dum are played by one character and a mirror. “You’d never know it was the same person. It’s incredible” Lucy promises.

“There are so many really varied elements all going on to pull this together, so its technically beautiful with some wonderful stagecraft. And yet it’s still so hard to describe.”

Creation has also teamed up with Oxford University’s St Anne’s College to provide Creation’s loyal, local audience with bespoke picnics which can be delivered to your home, complete with drinks, to accompany the show. Read our review of the delicious offerings here: https://www.oxinabox.co.uk/review-tea-for-two-we-try-brilliant-new-takeaway-picnic-concept-from-oxford-university-college-st-annes/

Ironically, before lockdown, Creation had shelved further plans to stage Alice again and were due to bring Wind In The Willows to their outdoor summer audience at Oxford’s University Parks. But on further inspection, when faced with what to virtualise, Alice proved the perfect vehicle.

Not only is the story wonderfully Oxford-centric, the original Alice In Wonderland being written and based on Oxford characters and people, written by Lewis Carroll, but it’s already a world famous tale.

“Alice is also so episodic. It’s basically a story of her going round meeting lots of different bonkers people one by one, so it really works in this type of scenario,” Lucy points out.

Launched this week, Lucy is already awed by the global audiences they are encountering. One family spread out throughout Africa have all booked in to watch together, while another was watching from their holiday home at Centerparks.

“You can watch it from anywhere, that’s the magic of it. So it really is a family experience that can be shared.

“It’s already been such a joy to see everyone really enjoying themselves, and to realise that when the audience are interacting on screen that they are actually speaking different languages,” Lucy said.

And what of Creation’s worldwide fame? “It’s been such a whirlwind and so unexpected. But we will keep doing what we do best, which is to keep making the best theatre in whatever climate and medium we can.

“It is funny though going from working out where to put your posters up in Oxford to how to accommodate a bigger audience in New York,” Lucy laughs.

Alice: A Virtual Theme Park begins today (Wednesday August 5) and runs until August 30, with audience capacity of 120 per show.

To book go to: https://www.creationtheatre.co.uk/whats-on/alice/

For picnic details go to: https://www.st-annes.ox.ac.uk/picnic-in-the-park-with-st-annes/