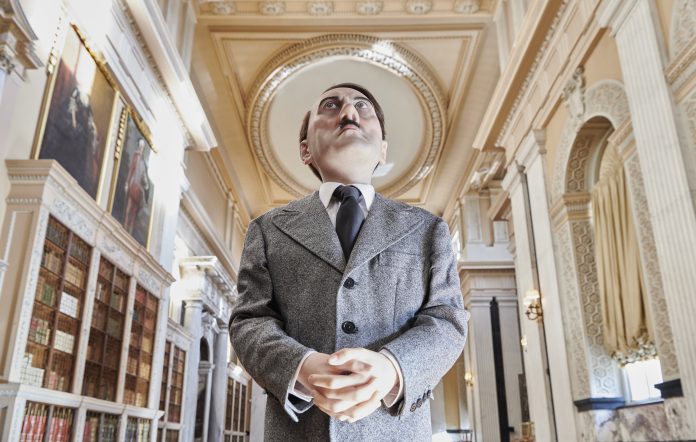 It will be Cattelan’s most significant display in the UK for 20 years,  and responds to the martial and political history of the palace, while exploring timely themes of national identity, power and personality.

The exhibition brings together some of the most influential artworks from Cattelan’s celebrated 30-year career, many shown in the UK for the first time.

Maurizio Cattelan was born in Padua in 1960 and is an Italian Conceptual artist. Admired for his satirical sense of humour often conveyed through hyperrealistic sculpture, he takes inspiration from pop culture and history, as well as his upbringing in 20th-century Italy to make work that profoundly questions socially ingrained norms and expectations.

Cattelan’s work has been shown in major institutions and museums around the world and was the subject of a 2011 retrospective titled “All” at the Guggenheim Museum in New York and a 2016 retrospective at La Monnaie de Paris. He has also exhibited artworks at Tate Modern, Tate Britain, and the Royal Academy in London. The artist lives and works between Milan and New York.

Maurizio Cattelan said: “What a time to be alive and what a time to make art about. I am very excited to open this exhibition at Blenheim Palace and I hope visitors will enjoy the show as I’ve enjoyed the journey to it.“

It also debuts several new pieces made especially for Blenheim Palace including the titular installation Victory is Not an Option which opens the exhibition, a site-specific walkway of Union Jack flags leading to the Palace entrance.

The exhibition sees Cattelan weave his distinctive wit into a fearless exposé of systems of power and authority, beginning with the striking flag installation which asks visitors to consider national symbols and the different emotions they evoke, with most prescient timing.

These ideas continue in the Great Hall, which hosts new monumental sculpture We’ll Never Die, a 12m replica of the flag-bearing arm of Emmanuel Frémiet’s 1874 Joan of Arc statue in Paris; a monument to the patriotic heroine which in recent years has become a gathering place for the French right- wing.

Novecento and a new version of Untitled – Cattelan’s profile encased in a gold boot – serve as allegorical reminders of Italy’s turbulent 20th-century history.

America, Cattelan’s solid gold, functioning lavatory also speaks to the historic constructs of status and influence that underlie institutions like Blenheim Palace, while wryly highlighting the commonality of basic human needs regardless of economic and social difference.

Installed near Churchill’s birth room, America is available for visitors to use during their visit.

Ego, a new suspended taxidermy work, offsets the horse Novecento a few State Rooms down. Towards the end of the exhibition, Him – Cattelan’s impactful sculpture of a kneeling

Hitler – acts as a stark warning of one man’s ability to change the course of history and a call to caution for the future.

Concepts of power and personality are also more playfully examined throughout the exhibition: a number of Cattelan’s signature tragicomic self-portraits such as Lessico Familiare, We and Mini-Me cheekily face-off with the official ducal portraits decorating the stately home.

The exhibition continues outdoors where visitors can discover canonical large-scale works such as Daddy, Daddy – a new, monumental version of Cattelan’s buoyant Pinocchio first shown at the Solomon R. Guggenheim Museum in 2008 – as well as his more recent Untitled, a walk-in, fully-frescoed Sistine Chapel shown for the first time in Europe.

Cattelan’s Victory is Not an Option is the sixth contemporary art exhibition hosted by Blenheim Art Foundation at the Palace, most recently seen in Yves Klein’s interrogation of power and authority and Jenny Holzer’s experience of war.

Lord Edward Spencer-Churchill, Founder of Blenheim Art Foundation said: “It is an incredible honour to welcome Maurizio to Blenheim. His bombastic humour and satirical art delights and shocks in equal measure. The master has lost none of his trademark wit and extraordinary commentary with this stunning show.”

Edward began Blenheim Art Foundation in 2014 to “establish a programme of modern and contemporary art exhibitions staged in the interiors and grounds of my family home, Blenheim Palace.

“I have been a passionate collector of art for a number of years, and my brother, the 12th Duke of Marlborough, shares this long-standing interest from his time in New York in the 1980s, during which he spent time with artists such as Andy Warhol and Jean-Michel Basquiat.

Every year we invite artists to engage with Blenheim Palace. Showing work by living artists reminds us that the palace is not frozen in time, but a living, ever-changing national monument to culture of all kinds.

“Every successive generation of Dukes has brought new art, design and collections of artefacts to the Palace — some of which seemed radical and out of place at the time — that have now become part of the Palace’s very fabric. Art from different times can co-exist happily, and together creates a rich tapestry of visual culture across the centuries.”

“We hope you enjoy the show.”

For more details go to: blenheimpalace.com