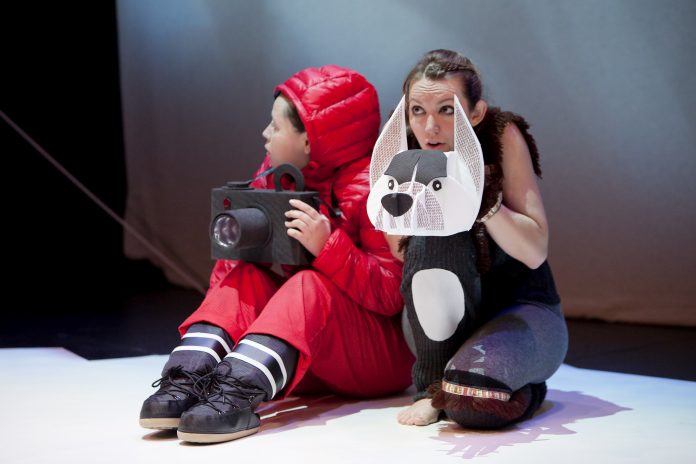 Breaking The Ice is an original show that tells the story of the unlikely friendship between a Polar Bear and a Husky. Set in the Arctic, this is a non verbal, wintry tale with a big heart.

Ending with the children in the audience being invited on stage to join Team Husky and Team Polar Bear, interact with the magical floor projection with the animals, then gently fall asleep under the Northern Lights on stage.

“Some get very into character and really enjoy stomping in the snow and trying to catch fish or howling and shaking their ‘tails’, releasing their inner Huskies,” Victoria Dyson of Filskit Theatre says.

“The piece covers very human themes such as making friends, how we communicate with people we don’t understand, fear and separation.

“It’s also a lot of fun and hopefully gives you an increasing awareness and respect for the natural world,” she adds.

Perfect for those who don’t have English as their first language, children with hearing impairments or other special educational needs, this is a very gentle and accessible show.

“Breaking The Ice is all about friendship and working together, even in the coldest of places and that feels like embracing the Christmas spirit to us! ”

“Absolutely! Breaking The Ice is a non verbal piece,” Victoria adds. “This was a conscious choice because our character The Photographer is out there by herself with no one to converse with, and we preferred to let the animals just be animals.

“We feel you can read what is being communicated by the characters facial expressions, the masks that are being puppeteered, the body language and their breathing and sniffing for example – just like you might with a pet!” Victoria explains.

“So the slightly bumbling nature photographer character in the show is the human eyes of the piece as we watch these two animals gradually form a bond.”

As far as story-lines go, first we meet the Polar Bear presuming she’s a dangerous predator! But when the audience realises she’s just hungry, a bit lonely and perhaps a little misunderstood, the Husky gets over her fear and decides to offer a playful paw.

Breaking The Ice also features beautiful interactive projection which helps with the plot and creates a backdrop of the world. “It allows us to create some really magical moments whether it’s in the form of a snowy blizzard or the cracking of the ice under the weight of the Polar Bear’s mighty paws,” Victoria adds.

And with vocal artist, Torgeir Vassvik making the soundtrack for Breaking The Ice, the crew is complete. Torgeir is a Sami vocalist and composer who comes from the northern most point of Norway, Gamvik in Finnmark. Known for his endlessly inventive blend of ancient Sami folk music, sounds from nature, diverse instruments (including the saw, bells, viola, frame drums and guitars), every noise or sound is made by him, including his fascinating throat singing, and even the more subtle background noises including Victoria’s favourite, his ‘chomping reindeer’!

So Christmas in Oxford then? “Yes and we absolutely love it there. We are particularly looking forward to being there throughout December and hope the show puts a smile on peoples faces.

“The children have the opportunity to meet the masks of the Polar Bear and Husky and we always think it’s a lovely way of encouraging children to be kind and respectful to animals.

“Overall its a warm, feel good piece that will be fun for all the family, so while it’s quite an alternative show, (It doesn’t feature Santa and definitely isn’t a panto), it’s a heartwarming wintry tale.

“So if you’re a fan of animals and want to see something a bit different or a little more gentle, then Breaking The Ice is for you.

“It’s all about friendship and working together, even in the coldest of places and that feels like embracing the Christmas spirit to us!

Breaking The Ice is at Pegasus from Wednesday until Dec 24.